skip to main | skip to sidebar

This is not a stitching post but I just had to share this link. Hastur the Dachshund agrees with the premise of the article which brings up an important point. The Lovecraftian viewpoint needs to be shared with our children. Enjoy. http://www.theonion.com/content/news/lovecraftian_school_board_member?utm_source=a-section
Posted by HasturTorres at 3/02/2009 01:09:00 PM 3 comments:

I set my goals really high with the previous List of Shame. This upcoming year has a brand new sparkling list of goals. I am getting rid of the old list.

My New Goals with estimated amount of completion time


In a nutshell. While I completed 13 projects (possibly 14 or 15 depending on the stitching I can do before the end of the year), I only completed 3.66 of the goals I set. I knocked off another sixth of my goals. So 7/18 of my goals have been completed. I suck! I am totally revamping my goal list this year. It will be much more reasonable. Of course I will continue to monitor my progress of the original goal list because I am a masochist.
Posted by HasturTorres at 12/21/2008 03:17:00 PM 1 comment: 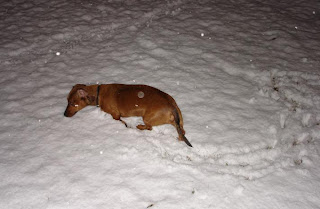 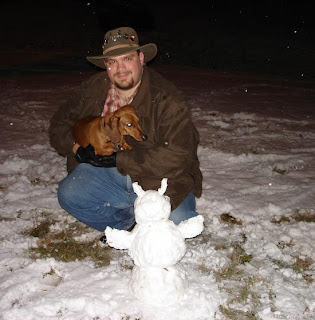 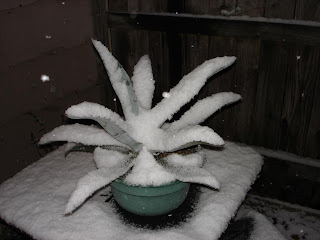 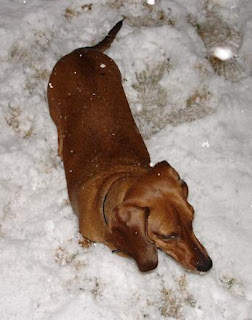 Due to a freaky storm we had snow in East Central Texas during the day...one inch! I have never seen snow here. Ice once a year but not snow. It was a winter wonderland. Normally our snowmen consist of these balls of ferns that grow in the tree but not yesterday. Poor Genghis the Aloe plant. We were not expecting this weather so he was not brought in the house before the freak storm. Notice how the dachshund sinks into the snow and it touches his chest. Poor weiner dog! He had never been in snow before. However, it was nice dry fluffy snow. The sidewalks and roads were to warm for the snow and ice to stick so we had all the fun of snow without the dangers of it (at least on the ground). 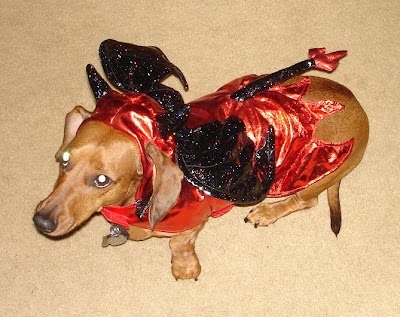 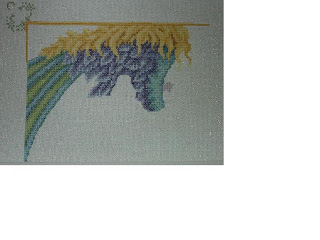 I can never get the pictures in blog to line up
right grrrr. 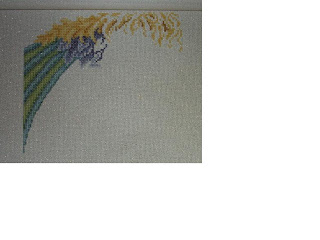 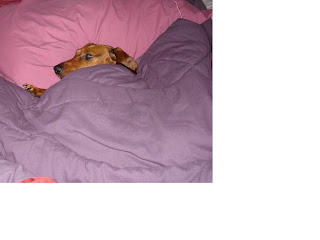 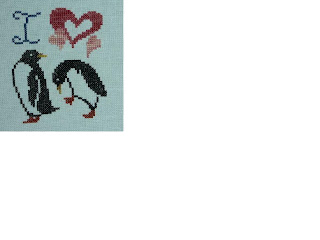 Explanation of Pictures: I have Princess and the Dragon before and a third of the way through the TWOctober stitch along the Wagon BB. I am really enjoying this stitch. I also posted a picture of Hastur that was taken while he was sleeping in this morning. The creature does not rise from bed until 11 am or noon if he can. I toil away on my dissertation while he lounges about. The last picture is I love Penguins by Brittercup designs. I stitched it for my DH. He luvs penguins! I am almost done with the Chatelaine Mini Mystery Mandala II. I would post pictures but it is a gift for someone.
Posted by HasturTorres at 10/10/2008 09:59:00 AM 3 comments: 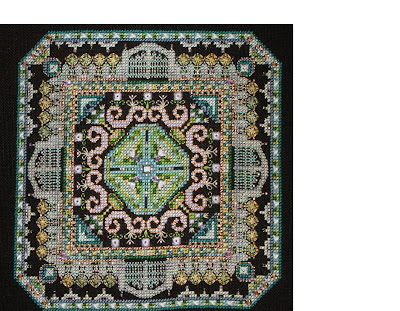 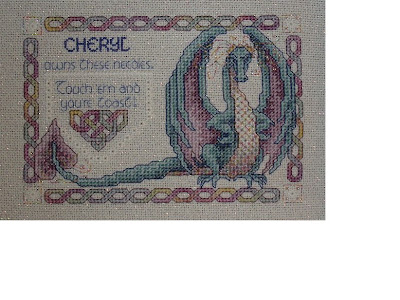 I have had two finishes within the past month, Mini Mystery Mandala 01 by Chatelaine and Needle Guardian by Teresa Wentzler. I made a few changes to the Mini Mystery. I changed out on the of the blue flosses for a lighter one and left off the most outer row of the border. For the Needle Guardian I used the cotton version of the Dinky Dyes instead of the silk. It was a very colorful and fun skein of overdyed floss to work with.
Needle Guardian took me over two weeks to stitch instead of just a few days. It is not that big of a project. I have been drowning in work related activities. For the past two weeks I have been working 12-14 hour days without any real breaks, even during lunch I had errands or meetings to attend (I lost 4 pounds-this is a good thing). Getting a Ph.D. can really suck sometimes. I have two weeks off from the workshop scene and we start again for two more weeks of torture. Excuse me while I go scream in frustration. End of whine.
I have finally started my best friends wedding gift. I discovered last night while rooting around in my stash that I had all the necessary speciality fibers to complete it. I also discovered something about my stitching habits in the process. The great discovery is that there is no reason for when I decide to stitch something...I just get obsessed over a project and I have to do it. Normally this happens when I have an open pair of scroll bars. I have resisted working on this project for well over a year now and all of a sudden I have to do it. I don't know what changed but the good news is that by the end of August I will finally have a wedding gift to send to my best friend...three and half years late... Oh the project is Cockatoo's Two of the Feather Friends collection by Britter Cup designs. http://brittercupdesigns.com/featherfriends.html Not a difficult project by any means but I just had to get my stitching mojo in gear and focus it on that particular project.
Posted by HasturTorres at 7/22/2008 09:11:00 AM 3 comments: